If someone is looking for another job in Year 1,

Even if they don’t take it …

I know you don’t have time

There’s an endless amount written on the internet about hiring “Rockstars”.  Finding them, not settling, and all that.  That you need to spend 20%+ of time recruiting (I said that myself here).  That the #1 most important thing you can do is put together a great team.  Which is absolutely true.

But the #2 most important thing you can do is retain your team.  And I don’t see enough talk about that.  Today, frictional unemployment for experienced SaaS or any internet engineers, salespeople, marketing stars, and other leads is … about –9.0%.  Negative, near as I can tell.  If you’re great in SaaS, just email me.  I can get you 3-4 job offers by the end of the month.

I did many things wrong as a CEO in both my start-ups.  But one thing at least quantitatively I did well was retain the team (at least before SaaStr).  I tried to copy my old boss, whose motto was Zero Voluntary Attrition.  In my first start-up, not a single person left.  In my second, I only lost one person that I really wanted to keep.  A few of the early folks who were absolutely terrific, needed to do the next thing after we hit Traction, after several years of the very early-stage grind.  You will lose some pure start-up people once things scale up.  But after that, I lost no one that we needed to keep but one.

Now I’m not saying it was all roses.  Some of them could barely stand me at times.  Others needed to find a way to change or modify their roles.  And — importantly — a number of the best folks on the team almost left.  Really, really close.

So what are some tips and tricks here?  Let me add a few thoughts:

The thing is — you can’t counter.  It’s too late by that point.  Once they tell you they have another offer … they’re already out the door.  A raise won’t do it, at least not for the good ones.

#2.  Always Pay Market or Above As Soon As You Can Afford It.  At Least to the Great Ones.  The other night I was at an event with a number of other CEO founders.  One CEO told me the story of how he lost a top up-and-coming engineer, who was making a five-figure salary … to a real boooooring company that doubled their salary.  That boring company had to.  How else can a boring company steal a star engineer from a hot start-up?  Lots of money.

My point here is this engineer should not have had a five-figure salary, even if it made sense in historical context (joined as a very junior person, consistent with prior salary).  Pay market, or above, as soon as you can.  It’s a sign of respect.  And most of the best ones won’t ask.  They’ll just eventually get frustrated and leave.

#3.  It’s Probably Not Too Late When They Interview.  So Be Paranoid.  And Intervene.  There are some very tell-tell signs of someone interviewing.  Out of the office at weird hours.  Talking on their mobile phone on the sidewalk – and moving away from you if you approach them to say Hi.   Sick out-of-the-blue one day, healthy at work the next.  Signs of frustration in their posts on Facebook, in new connections on LinkedIn.

Now by the time they take another job, it really is too late.  Even if a raise would work then, which it won’t … the relationship is gone at that point anyway.

But it isn’t necessarily too late when they start to interview.  It may be, in its own way, a plea of exasperation as much as anything else.  If you can fix that issue, and you want to fix that issue — you can keep him/her more times than not.

#4.  Find a Growth Path for Everyone, Especially the Great Ones.  You have to find a growth path for the great ones.  They join a start-up to grow, to learn, to do new things.  If they can’t grow, they die a little every day.  It’s your job to understand the career path for at least your first 50 employees.  Know it.  And do whatever you can, within the boundaries of reality, to help them achieve it.  (But bear in mind that the good-but-not-great ones may not really want a growth path.  Or at least, may not want the stress and hard work associated with it.  So this really only works for those that really want to grow.)

#5.  Talk to People.  For Real.  Get Real Feedback.  At least Once a Quarter.  I know you probably hate annual reviews and the like.  I agree.  They are generally pretty wasteful in a start-up.  But you do need to do something different here.  You need to meet 1-on-1, in a unstructured way, with all your best people beyond your direct reports — at least once a quarter.  Quietly.  And ask them what’s frustrating them about their job.  What they want to be doing — but aren’t getting to do.  Be friendly — but blunt.  You need to learn.  Get it out of them.  And definitely do weekly 1-on-1’s with your direct reports.  You just gotta do ’em.  More on that here.

You may think you know if you have drinks together, or go see movies together, or whatever, that you know.   But you don’t.  Even if people complain in that context, it will be general complaints.  You won’t learn, or know, what your top people need to find their growth path at your company.  Where they feel stalled out and frustrated.  You have to ask.

Because there’s absolutely, positively, nothing worse in the pre-Scale days than losing a rockstar employee that you could have kept.  It just kills you.  Later, when you have 100, 200+ employees, $20-$30m+ in ARR … well … you sort of can swap people out, at some level.   Including maybe even you.  Everyone should be redundant at that scale or you’ve failed as CEO.   But until then, every key player is critical.

If nothing else – address retaining your top troops at least as seriously as you do recruiting them.  And whatever you do, don’t ignore the ones that don’t complain.

And on that note, don’t just take it from me.  Take it from Don Draper.  Don’t let it happen to you.

By The Time You Give Them a Raise, They’re Already Out The Door originally appeared on SaaStr.com 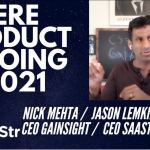 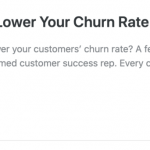