Maybe you can wait longer, sometimes a lot longer

But you see growth start to decline in new bookings, that's a sign

Over the years at SaaStr we’ve talked a lot about hiring a great VP of Sales, when it works, when it does, and how it moves the needle.  Put simply, a great VP of Sales will come in and take whatever leads you have more … and get more out of them.  Close more of them.  And close them for more money, on average.  The combination of the two alone can dramatically increase your new bookings, even with the exact same number of leads.  More on that here.

What we haven’t discussed as much is the simple math on the flip side … what happens if things are going OK, so you decide to hold off.  To stick with founder-led sales longer than most folks do, i.e. past $1.5m-$2m ARR or so.

Sometimes this can work, especially in a heavily freemium model, and especially when you sell to very small businesses or individual developers or small teams.  Sometimes, enough leads keep coming in that even if in theory a traditional VP of Sales could close more, it doesn’t matter.  You are growing fast enough.  Stripe didn’t begin to add a traditional sales team until 2018, and they did fine.  Although Twilio started a lot earlier …

If you don’t think you need a real VP of Sales even after $1m-$2m ARR, then I’d at least suggest an admittedly obvious test.  Are your new bookings still growing?  And are they growing fast enough?

This is the trap I find a lot of CEOs with early product-market fit fall into.  On their own, or with say 1-3 sales reps or even happiness officers, they figure out how to close $20k a month, then $40k, then $100k a month in new bookings.  That’s great.  But then, it sort of slows down.  That $100k in bookings drops the next month to $80k, then rebounds to $120k, then back to $90k.  The MRR/ARR keep growing, because you are adding bookings.  But the % growth rate begins to decay as the absolute bookings growth slows way down.

Here’s an over-simplistic version of that math, but you can see it here:

You can see in this example, that the % growth looks strong through the summer … even as new bookings start to flatten.  Even by the end of the year, growth seems OK at 10% a month.  But really, decay has set in long before that.  The founder-led sales process stopped making progress in bookings growth months ago.

I see this again and again, and founders push through flattening bookings for 6+ months … when they could also be using that time to also go find a VP of Sales.

And you should start looking early, because it takes time.  It can take 6-12 months to close a great VP of Sales, because most of them already have a well-paying role that it will take time for them to leave.  More on that here.

So my simple advice in a simple post is just this:  if you want to wait past $2m ARR to start looking for a VP of Sales, maybe that’s OK if the numbers are strong.  But at least be hyper-alert to any slowdown in new bookings.  Because when it comes, you’ll wish you’d hired someone who could turn the same 100 leads into 150% or more of what they were worth before.

At least, begin the interviewing process the month you realize new bookings growth isn’t accelerating anymore without a VP of Sales.

Why Founder-Led Sales Breaks Earlier Than You Think originally appeared on SaaStr.com 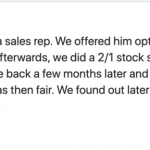 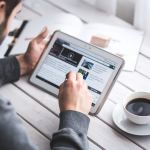