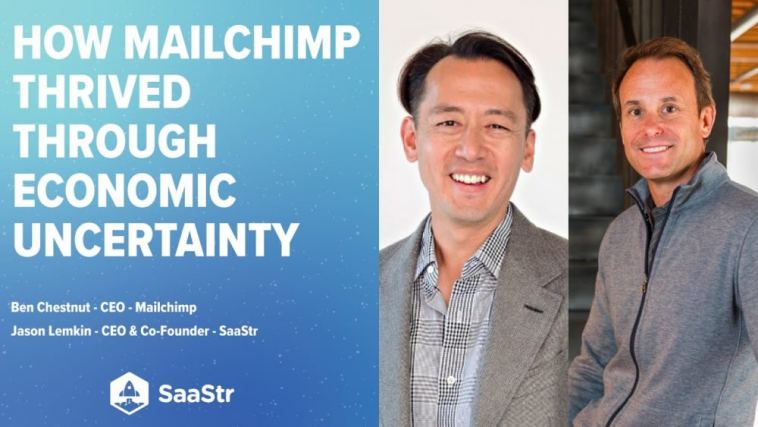 My Top 10 take-aways from talk with @benchestnut this morning:

2/ You may not need a moat. Maybe let them go if they aren't happy. Happiness is a moat.

I was fortunate enough to lead two discussions, the first with one of my favorite CEOs, but one I hadn’t been able to do a deep dive with before, Ben Chestnut, CEO of Mailchimp.

I’ve been a 3x customer and watched Mailchimp over almost 20 years grow to be perhaps the first SaaS company to hit $1b+ in ARR being 100% bootstrapped.

1. Yes, bootstrapping really does take 3-4 years longer.  We’ve talked about and written about this many times before, but Ben vigorously agreed.  Mailchimp took years to transition from an agency to a software business, and then years until it finally took off when they added freemium.  In fact, really, it took 2 years to get going and 4 years to hit Initial Traction.  Bootstrapping is less a lifestyle than something we just do when it’s the only or best option.  More here.

2.  You may not need a moat. Maybe let them go if they aren’t happy. Happiness is a moat.  I’ve had a lot of discussions over the years on what constitutes a “moat” for many SaaS products.  Ben confirmed there is no moat at Mailchimp.  He said in fact, he doesn’t want moats.  If a customer wants to leave, he wants them to leave.  And hopefully earn them back later.  “Customer happiness is a moat”.  You don’t get that if you make it hard to leave.

3. Phase 2 might take 12 years to get to. It’s OK. Talk to more customers to know when you are ready.  Mailchimp in the past 2 years has grown from an email company to a marketing automation company.  That’s a big change, and their own version of finally going upmarket.  But boy — they waited!  Almost 20 years.  They waited until $1b in ARR to go upmarket more, to add a much richer and broader product suite that took them out of “just” email.  So do at the right pace. A bit more here.

4.  It can take 24+ mos. to get to real Product Market Fit. Mailchimp didn’t really have product-market fit until it went Freemium a full 2 years in.  We’ve talked for years on SaaStr on how you have to budget 24 months to really get something off the ground in SaaS.  Here’s another case study.  It also took Mailchimp 24 months, and a tilt to freemium (which they initially resisted), to even get to $1m in ARR.  A bit more here.

5. Existential threats never end. Even today, a GDPR type business model threat (or global pandemic) happens regularly.  Ben clearly even at $1b in ARR feels like things are always a bit fragile.  He agreed Mailchimp can’t be killed now — it’s way too big.  But it regularly encounters huge threats.  He liked it a bit to “doom”.  Doom looms, even at $1b+ ARR.  Not sure this made me feel better, but it was real.  It never gets easier.  You just get better.   And perhaps, only the paranoid survive, even in SaaS.

6.  Brand matters, even very early. Be true to it. For Mailchimp, it was being fun.  Many of us are slow to learn the power of brand, even dismissive of it in the early days.  But Ben came from a brand marketing background and strongly believed in brand from Day 1.  Being “fun” was an important part of their brand.  I do remember it, in part, attracting me to Mailchimp as an early-ish customer.  Ben relayed a story of when his marketing team wanted to take an edgier approach to a competitor, and take out a taunting billboard across from their offices.  He nixxed it.   It wasn’t fun, and it wasn’t true to their brand.  A related post here.

7. Bootstrapping isn’t a magical choice. No one would fund them.  We hit this point above, but Ben wasn’t dogmatic about bootstrapping.  They just had no choice.  A bit more here.

8.  Went from agency -> software company only once they had enough cashflow to support it. It took them years.  We again hit this above, but it was interesting to hear just how conservative them were switching from running an agency to a software company.  They took years, and didn’t fully switch over until they could pay their 3 salaries.  Perhaps that still works today.  But things also move faster today.

9. They begged their happy agency customers to buy software. They were mad about the change, but it worked.  This was an interesting point.  Their agency customers didn’t really want to buy email software from them.  They wanted the design agency to keep doing what they had been doing.  But because trust had been built up for years, they still bought the new product from the team.

10.  Thinks we’ll be back to where we were, not soon, but sooner than we realize. We’ll be back in the office, back building together IRL. With a distributed flavor.

My Top 10 Learnings From Ben Chestnut, CEO of Mailchimp originally appeared on SaaStr.com 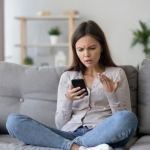 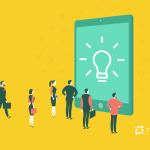