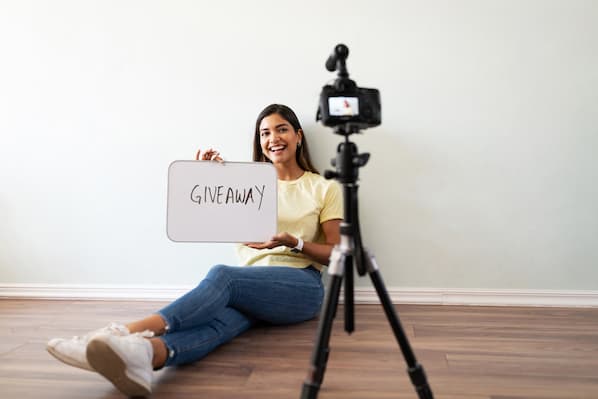 Did you know that 78.4% of contest shares are done on Facebook? And that on average, 34% of new fans are acquired through a contest?

Additionally, Facebook has over 2.7 billion monthly active users as of the second quarter of 2020.

As a marketer, those stats are hard to ignore. Social media contests and giveaways are an excellent way to engage fans and acquire followers.

However, running a contest requires a lot of planning. It isn’t as easy as 1-2-3 or A-B-C.

The rules on Facebook giveaways are pretty simple. According to Facebook, if you run a Facebook giveaway, you must include the official rules, offer terms and eligibility requirements (such as age and residency restrictions), and compliance with applicable rules and regulations governing the promotion and all prizes offered (meaning registration and obtaining necessary regulatory approvals).

Additionally, the copy needs to include a complete release of Facebook by each entrant and acknowledgment that the giveaway is in no way sponsored, endorsed, or administered by Facebook.

You can run a giveaway on Pages, Groups, Events, or within apps. However, you cannot run a giveaway on a personal Facebook page. You also can’t use personal friend connections as a part of the giveaway, meaning you can’t have people share on their timeline to enter or share on a friend’s timeline, or tag friends in the post to enter.

Disclaimer: This blog post includes some information on legal issues surrounding internet marketing, but legal information is not the same as legal advice — applying the law to a specific circumstance. We’ve conducted research to better ensure that our information is accurate and useful, but we insist that you talk to a lawyer if you want professional assurance that our information, and your interpretation of it, is accurate. In a nutshell, you may not rely on this information as legal advice, nor as a recommendation or endorsement of any particular legal understanding, and you should instead see this post’s info as for entertainment purposes only.

Okay, now that the nitty-gritty is out of the way, let’s get into the meat and potatoes of Facebook giveaways.

The first thing you need to do before you run a giveaway on Facebook is to decide what the goal is.

Your goal could be to increase brand awareness, collect email addresses, gain new followers, increase engagement, or drive traffic to your site.

Once you know your goal, you can come up with the type of giveaway you want to run (more on this below). For example, if you want to gain new followers, you could run a photo vote contest, where users need to ask friends to like their photo in the contest. This will drive more people to your Facebook page, and hopefully, convince some of them to follow you.

2. Choose a prize that makes sense for your target audience.

Once you know the type of contest you’re going to run, it’s time to choose a prize. Whatever prize you choose should make sense for your target audience and be something that they want. Choosing a $20 prize probably won’t entice people to enter. In fact, the average value of a social media contest prize is $369.

Also, generic prizes don’t usually work as well. Try coming up with something specific that your audience would like. For instance, if you’re a fitness influencer, you could run a Facebook giveaway with a workout bike as the prize. In this example, the prize makes sense considering the target audience of a fitness enthusiast.

Now, you need to come up with the rules. Set a time frame for your contest, choose an entry method, and decide on any eligibility requirements.

Once you’ve decided on the rules and regulations, write them out. Don’t forget to include all the information that Facebook requires.

At this point, you know what type of giveaway you’re running, you’ve decided on the prize, and you’ve written the rules. All that’s left to do before clicking “Post” is creating the assets. You’ll need images, graphics, and a caption written. The assets should make it clear that you’re running a giveaway and what the prize is.

Once you’ve posted your giveaway on Facebook, you need to promote it through several channels. Organic reach on Facebook has plummeted to 2% in recent years, so you can’t just trust that your followers will even see the post.

To promote your Facebook giveaway, you can use other social media platforms, write a blog post, create a video, and email your subscriber list. The more ways you can get it out the better.

Now that your giveaway is over, and you’ve contacted the winner, and posted that the giveaway has closed, what do you do?

It’s time to measure the success of your campaign. You had a goal, and now you should look at a few key metrics to see if you succeeded.

Some metrics to look at, depending on your goals:

A photo vote is a type of Facebook giveaway where you ask users to upload a photo. Then, you’ll encourage people to vote on which photo is the best.

This is a great way to acquire new followers because participants will ask their friends and family to go vote on their photo.

While you can’t have tag friends or share posts on their personal page, you can still ask them to comment on your posts to win.

These types of giveaways usually ask users to write a caption, fill in the blank, or answer some creative question.

This is a really low barrier entry method that could be great for increasing engagement and brand awareness.

Now, let’s look at some Facebook giveaways in action.

In this Facebook giveaway, Loveline Golden Retrievers ask participants to send them a photo of their dog to be showcased in their annual calendar. Once users sent in the photos, they uploaded them to an album. The photos with the most likes won the contest.

This is a classic photo vote contest with a prize clearly targeted to the audience. People with golden retrievers would love to have their pets showcased in a calendar (I mean, who wouldn’t?).

This is another great example of a giveaway that’s clearly targeted to the right audience. Presumably, most people who like a game page, like Bling, on Facebook, actually play the game.

That’s why a giveaway for free in-game points is a great idea. Additionally, this is a low barrier entry giveaway as well — you only need to like the post and comment.

Running a Facebook giveaway doesn’t need to be a hassle. It can actually be a simple process if you follow our six-step guide.

How to Run a Facebook Giveaway: A 6-Step Guide originally appeared on HubSpot.com 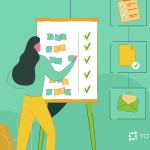 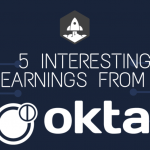