Edward Munch is the creator of this much-hyped painting from the 19th century. It is one of the most sort-after artworks that has even been represented in popular culture like cinema. If you remember the film, Scream or Home Alone, you would know what I am talking about. If you have seen them and do not understand yet, I suggest you reconsider watching them!

This artwork is also known as “The Cry”, where you can see a man standing at the docks and anguishing away in pain or fear. He screams with his hands clasped to his face. No one knows the mystery behind the painting even today. Nor do we know what motivated Edward to create such a horrific yet mysterious masterpiece in the first place.

To many art lovers, this painting is more than what it represents. It is considered a representative of the human psyche as it unravels the human emotions and traumas faced by them. Edward had started a series called “The Frieze of Life” and his painting is part of that theme.

The scream got its due share just after World War II. The timing of the release of the painting was perfect- there was despair and hopelessness all around. The general public had suffered their share of agony and pain. The fact that this painting immediately struck the right psychic chords of the people, made it stand out.

Edward used the right landscaping to bring about the kind of fear and chills that it represents. The detailing of the bridge, the twin ghost-like shadows walking from far away, and the sudden appearance of one ghost-spirit from the center of the bridge, screaming away gave chills to one and all.

To add to the chills, Edward used the colors and contouring to generate unparalleled human emotions of despair, fear, and death. This story is not of a man or a woman but a story of everyone from the post-traumatic WWII era.

Edward Munch was different from his peers as he did not hide his emotions and did not make any attempt to work on them. On the contrary, he used them in his artwork, romanced them to depict his imagery, and toyed with them to send a message to the masses.

People knew of his neurotic nature and he only said that without his illness and his emotional turmoil, he would not be able to even fathom to paint and no new ideas would flow into his mind. He strictly felt that his tribulations in life were an integral part of who he was and what he represented.

Much of this Norwegian’s behavior is credited to his illness, grief, and the inheritance of mental de-stability. During his formative years, the artist grew up as a wanderer and met people who urged him to paint to vent out his emotional pain.

The way the world functions is strange. What garners attention, gets popular. By that accord, the scream painting did well. Initially, there was a lot of speculation about whether the face depicted was that of a man or a woman. However, the art lovers as well as the critics surrendered and agreed to call it faceless and de-personalized.

The mystery created around the painting due to the colors, usage of vague shades, and human figures and the out-loud screaming face made it a subject of utter chatter in the art circles. To add to more mystery, Munch mentioned that the open gaping hole in the mouth sucked the dark hell and that this face was on a mission.

People started to relate this painting to the painter himself, saying that it was Edward’s self-portrait and his way of showing his pain. However, as more and more people got exposed to this artwork, the general public started to see themselves as the character holding his/her face and screaming out loud, while the darkness still surrounded them.

“Ghostface”, the key antagonist used from the movie Scream, the series is a direct reference to the face that you have seen in the first image of this article.

Such faceless character was not created in art or movies earlier and the mere usage suggests that it opened up undiscussed avenues of taboo and cliches that were so far kept under the rug.

Another popular film that made stars out of actors, is Home Alone in the 1990s. If you see the above picture, you will get a clear picture of how munch’s painting was curated to give life to the movie’s poster cover. The two “ghosts” are behind the child, planning to kidnap him while the parents are away during Christmas.

Edward Munch was a great artist and undoubtedly, a troubled soul. His uncanny ability to use his inner pain and darkness gave others an idea of his mental and deranged artwork. This made him both looked-upon and made fun of, by many simultaneously. And wouldn’t it be great to have such a profound masterpiece in your possession. While the original work is near to impossible to acquire, the 1st-art gallery has many masterpieces in a recreated format for you to select from even the Scream painting.

Why is Scream one of the Most Iconic Artworks? originally appeared on SaaSMetrics.com 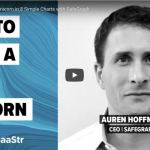